In a prior post I talked about something called an adventitious growth strategy. One of the main concepts within that strategy is thinking conjecturally about what kinds of people might like to use (or might even be delighted by) your product. The value of doing this is so that you can construct theories and experiments about how to find and acquire them.

One of the ways I find it useful to consider the suitability of a theoretical user (“Sophie” or “Dillon”) for a certain product is to apply a simple mathematical formula.

This is not a formula into which you plug numerical values. But kinda just gut feel estimates. Big, small, etc. The point is in forcing yourself to think about these things as quantities, and then to relate those quantities to each other.

The simple formula I use is Inertia / Pain.

The best way to understand the implications to user acquisition is like this: 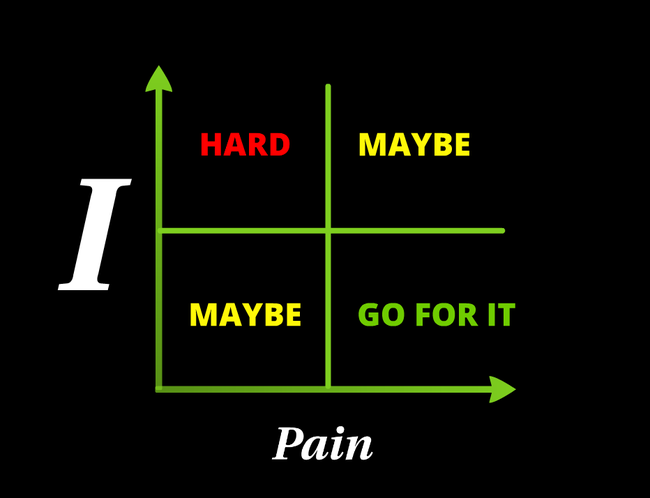 Inertia is the harder of the two values to guess at, because it operates on multiple levels. But the general idea is how “stuck” is the user in the current modality to which your product offers a much better solution? You can be “stuck” doing something a certain way for lots of reasons. Habit. It’s all you know exists. Or maybe because it’s the way everybody does it at work. So you have to be multidimensional when you think about Inertia.

The Pain quantity is comparatively easier to guess. How much does it probably suck to do this that way for the people who do it? Or, how much better would they feel if there were a much better way?

To give these concepts some flesh, let’s pick an easy example everybody will grok. Suppose you are the Uber founders before you launched, and you are just thinking really broadly about the viability of the demand side of the business. In other words, you’re trying to guess at how suitable your envisioned product will be for people who need to get from point A to B. So you think about Inertia. How stuck are they doing it the way (or ways) they do it? And you think you about how painful those ways are.

This is hard when you try to think about people in the aggregate — as in ALL the ways people get from A to B. But it gets easier when you separate them into the different modalities and circumstances of getting from A to B. It gets easier to see Inertia-Pain pairings.

People who are drunk at parties and need rides home safely in the middle of the night is a good one. Their stuckness comes from the small number of options they have in that situation. Solutions require either sober forethought, or have lots of failure risk. Their pain comes from having to suffer thoughts of cab-hailing or walking home in the rain, which undesirably intrude upon (or may even shorten) party time. You can see how that worked out so well for limo riders being Uber’s first “campus”.

Another example I can relate from direct experience comes from the early days at Eventbrite, when we were already enjoying some use but were looking for “next campuses”. The growth challenge was how to scale beyond a handful of SF-based tech parties to the rest of the world. There were lots of “visible” markets we could have chased. The Inertia / Pain formula was useful in deciding who to target. For example, we saw that there were these kinds of big conferences that collected hundreds of thousands of dollars in ticket sales. But they had a lot of Inertia (like wanting to use their own merchant banks). And they didn’t have a lot of the type of Pain we were becoming aware was important to our already-successful users. That was the Pain of not having a pre-existing audience to sell tickets to. Neither did our early adopters have much Inertia attached to how they wanted to get paid from ticket sales. They had no way to get paid from ticket sales. Mainly these big conferences were just churning through their own email lists, year over year, or relying on “we always go to the So and So Conference” inertia. So our value props of i) helping you put butts in seats, and ii) giving you a way to get paid when you didn’t already have one, were less important to them. The optimal intersection was where people had near-zero Inertia (because they had nothing or were hacking together a solution) and lots of “no butts in seats” Pain. Once we saw the opportunity space through this lens, it got a lot easier to figure out where we should go next.

I often steal ideas from nature and bring them into what I do. When you’re making shit up as you go along, at the intersection of totally original software user experience, business, and human behavior, I have found it frequently helpful... Continue →