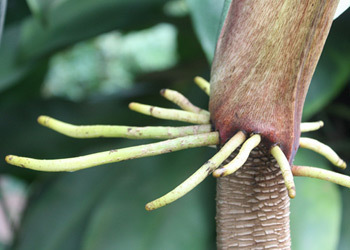 I often steal ideas from nature and bring them into what I do. When you’re making shit up as you go along, at the intersection of totally original software user experience, business, and human behavior, I have found it frequently helpful to incorporate patterns and models from the natural world into my strategies. Absent any direct experience with a complex and entirely unprecedented experimental scenario, models from nature can provide a framework for your intuitions. They can also provide a path forward when you don’t have a clue what to do next.

One such natural model I’ve become obsessed with lately, that is singularly relevant to the topic of startup growth, comes from the world of plants. The model from nature I want to hold up is the adventitious root. This is a special kind of root. Not all plants produce them. But they are common enough that you will surely have seen them while on a woodsy hike. What’s so special about adventitious roots is that they they do all the things regular roots can do, like absorb water and nourishment. But they also do something else that is rather remarkable. Through a combination of i) the power to appear from any part of the plant that is advantageous, and ii) the ability to travel horizontally, even great distances, before having to dig into earth again, they can achieve an altogether much more strategic effect than regular roots, whose function is primarily to sustain the “main trunk”.

The strategy of the plant that possesses adventitious roots is not just to feed one plant (by making it taller, if you will). But to spread more plants across a territory. It is for this reason that plants possessed of adventitious roots are sometimes described by botanists as being “aggressive species”. Because they are not content to just grow upwards in the spot where they happen to be growing. They want to conquer territory, and grow upwards in numerous places.

Let’s try to apply this principle to the problem of growing a new software product. I want to relate this directly to the model for early startup traction that’s been freshly re-suggested recently by both distinguished Messieurs Thiel and Graham. That is the idea that a startup must do an assortment of things that do not scale, as necessary to put said product into the hands of some (non-zero) number of people whom the product delights.

Would-be growth hackers and those who would unleash them, let us not make light of that prior point. The really, really hard part is creating a product that delights anyone. Having done that miracle, the growth challenge then becomes how to spread that core experience to others.

It’s clear that some companies “grow” more through product diversification than by scaling a core experience. I don’t want to include those in this discussion, since the growth problem is less pure.

The classic example Thiel always brings up is how Facebook succeeded, first at one college (Harvard), then moved on to other colleges, and then to the rest of the world. This is what Graham called the “Fire”. To be fair, the Facebook example is not very instructive, tactically. What it does for me is it gives me a model in principle. When your product is being used within a single “campus”, it can inspire you to think of other groups of users that might be other “campuses” for your product.

Unlike the Facebook, example, you probably won’t have the benefit of a visible growth roadmap for scaling based on the obvious availability of more campuses. So you have to think of campus in a metaphorical sense. A campus can be a cohort of untapped users who share a key attribute of the users in your first campus.

Because the key is to focus on people whom your product delights, the more you know about the people for whom this is already true, the better you’ll be able to leverage their attributes to make good guesses about where other “campuses” might be.

One thing about adventitious roots is that they are kind of a hedged bet, too. There’s something to be said for putting all of your energies into growing tall. The tallest trees can put up canopies at great height that hog all the light, so that things that are still crawling horizontally can’t compete. In an ideal world, you would do both at the same time. But in the real world you may not be able to simultaneously invest in both “grow tall” and “spread” strategies. If you are a very early stage startup, I would definitely focus on spread strategies. The danger with the grow tall strategy is that the campus you’re growing in may not ultimately be very big, nor the tree it sustains all that tall. Indeed, this is certainly one of the main evolutionary reasons adventitious roots exist. To find places of open sun.

The exercise of deconstructing the attributes of the users whom your product delights is extremely beneficial.

There are lots of ways to bring insight about who your users are to the table. Avail yourself of all the ones you can. Interviews are awesome. Data is also great. What you want to do is look for attributes involved in product delight that might be common to other, perhaps larger, groups. In the case of Facebook, going from one campus to many campuses was the same as your product going from one small group to one much bigger group where the common attribute was they were college students. In most cases the commonality is less obvious, thus the fun in trying to find them.

It’s great to find more groups of users of any size. But what you really want to do is find much bigger groups. Thinking about the attributes of your most delighted users in this light is full of opportunity, but also full of distraction. Imagine if Facebook had taken its delight signal too literally and failed to evolve beyond the Hot-or-Not variant it was it when it was first born. Of course, the implication of this is that your product may have to evolve (perhaps dramatically) in order to grow. This, again, is something you can and readily should do, if you are a very early stage startup.

An Adventitious Growth Strategy can be used by latter-stage companies, too. But inertia around who the product is supposed to be for can set in and get in the way earlier than you’d think.

Let’s define an Adventitious Growth Strategy as the process of 1) learning or making good guesses about the attributes that make your most-delighted users that way, and 2) using that insight to inform acquisition experiments targeting potentially (much) larger groups.

This contrasts with a strategy focused solely on growing to a maximum size in the campus you’re in.

In a prior post I talked about something called an adventitious growth strategy. One of the main concepts within that strategy is thinking conjecturally about what kinds of people might like to use (or might even be delighted by) your... Continue →